Regulating animal use will only ever make people feel comfortable with continuing consuming animal products. We need to set the bar at the aim—To abolish animal use through changing our attitudes towards non-human animals, by seeing them as persons and not things.
~ Sally Thompson (June 11, 2010)

[T]he pernicious and abominable abuse of selling slaves was yet continued … and requiring us to use our power to remedy the said abuse; which, notwithstanding we saw very little hope of accomplishing, by reason that the trade of this country lay wholly in slaves and ivory.
~ Alderano Cybo (1683)

[I]t is no Evil thing to bring them out of their own Heathenish Country, where they may have the knowledge of the One True God, be Converted and Eternally saved.
~ John Saffin (1701)

You could say it’s wrong to kill a being whenever a being is sentient or conscious. Then you would have to say it’s just as wrong to kill a chicken or mouse as it is to kill you or me. I can’t accept that idea. It may be just as wrong, but millions of chickens are killed every day. I can’t think of that as a tragedy on the same scale as millions of humans being killed.

What is different about humans? Humans are forward-looking beings, and they have hopes and desires for the future. That seems a plausible answer to the question of why it’s so tragic when humans die.
~ Peter Singer (March 8, 2009)

There is one way to change the status quo: to dislodge people from the default position that animals are things. There is one means to that end: creative, nonviolent vegan education.
~ Gary L. Francione (April 10, 2010) 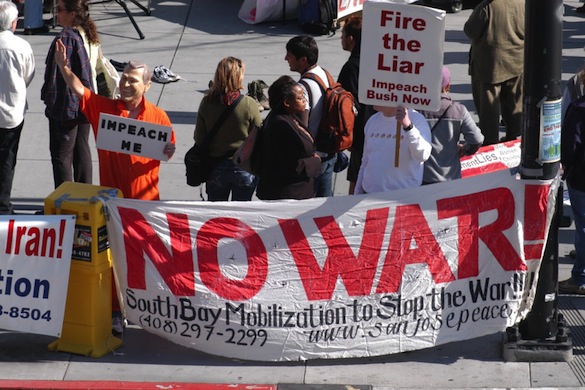 During the days of the Bush administration, I could be found at various protests wearing my Bush mask, a Guantanamo Bay orange colored jumpsuit, fake handcuffs, and a sign that read “War Criminal” on one side and “Impeach Me” on the other. My goal was to focus the public’s attention on the serious allegations being brought against then President George W. Bush and his cohorts. When I got someone’s attention I always tried to be clear about my goal of wanting to see Bush, Cheney, Rice, et al., investigated to the fullest extent of the law and, if found guilty, dealt with appropriately.

During that time I monitored what other folks were saying regarding the matter. Sadly, even though many would talk about the allegations held against Bush and his buddies, they would hardly ever say anything about taking them to court and almost 100 percent of the time concluded with they’ll never be held accountable.

Well, I think we all know what happened—absolutely nothing. That is, Bush, Cheney, et al. walked out of the White House as free as they came in. Why? My guess is that although there existed (and continues to exist) evidence to, at the very least, get them into a court of law, it was all the negative chatter that helped suppress what could have been a huge public outcry if only we had had a unified voice calling for justice.

END_OF_DOCUMENT_TOKEN_TO_BE_REPLACED

There are several roads to veganism and many individual views of it, but veganism is one thing and one thing only—a way of living which avoids exploitation whether it be of our fellow men, the animal population, or the soil upon which we all rely for our very existence.
~ Eva Batt (1964)

One can only guess how many more vegans there would be in the world today if in 1964 the majority of vegans took Eva’s simple yet powerfully clear message of what it means to be vegan to the non-vegan masses and continued to do so up to current times. My guess is a lot more. Sadly, instead, the majority of vegans took a different route. A route that has cost the lives of billions upon billions of sentient beings by suggesting one can exploit “humanely” thereby enabling folks to guiltlessly remain non-vegan. Or by suggesting that being vegetarian, one who continues to use other animals for everything except their flesh, is somehow morally different than any other non-vegan.

The good news is that each of us can reevaluate what we are saying to the non-vegan public and if we find we’re not being as clear as Eva was, we can change our message for the betterment of all.

When one stops to think—the fact that none of us need to consume the flesh, secretions, skin, hair, etcetera of nonhuman animals in order to thrive—we mostly enslave, torture, and steal the lives away from others for pleasure alone.

Confined cows, pigs, birds, and so many other nonhuman animals are forced to serve us humans for their entire lives. And as Nathan E. Schneider states, “[e]ven the most doted upon slaves are still slaves.” Thus whether the nonhuman is “owned” by a small family-sized farmer who names and “loves” her and allows her to roam on a “free-range”, or a mega-factory conglomeration that coldly assigns the slave a number and never sees “it” in its cramped quarters, the fact remains that these poor beings are enslaved to satisfy our taste buds.

Torture comes in many ways to our slaves. Baby girl chickens have their beaks seared off with hot blades while their “useless” brothers are thrown into grinders alive. Many animals are castrated, branded, have their horns and tails cutoff, etc. Cows are forcibly impregnated once a year to keep their milk production in high order. And, nine months later, upon birth, their babies are usually stolen from them. I believe this kidnapping is one of the most heinous things someone can do to another and all of this is performed to quench our thirst for slave products.

END_OF_DOCUMENT_TOKEN_TO_BE_REPLACED

Slaveholders, when pushed into a moral corner by abolitionists, create whatever arguments it takes to make consumers feel okay about purchasing the products of slaves. Back in the 1830s when American Abolitionists were hard at work educating the public about the evils of slavery and how slavery needed to be immediately abolished, slaveholders were also hard at work trying to prove the abolitionists wrong.

One proslavery argument used in the 1830s was that owners were like benevolent parents to their slaves. This was the “Happy Slave” argument and it was used to convince the public that Southern slaves were much better off then their Northern (non-slave) factory worker counterparts.

Another proslavery argument spoke to the supposed supremacy of the white race which suggested that the “intellectual capacity of Africans was abysmal“. This, of course, was racism and it too was used to keep the public’s growing concerns at bay.